Lysol is one of the most, if not the most popular disinfectant sprays and can be found in almost every other house in the US. Maybe that’s why after reviewing my notes I noticed that “Lysol” in customer’s questions quite frequently. Usually the question goes a little like this: “Can I spray my plant with Lysol to get rid of ________, or will that kill my plant?”

Usually my answer was a quick “no, it won’t kill your plant but it won’t look pretty” because after years of pesticide use I’ve learned that almost anything that comes in an aerosol can has the potential to burn plants with flowers, usually the most desirable part of the plant being the most susceptible to damage.

About a month ago, while on my way to clean the bathroom at work I noticed that a bottle of non aerosol Lysol had appeared in the supply closet. This made me wonder if I was wrong about Lysol and excited to try a very informal experiment. 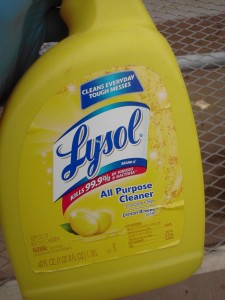 First, I randomly selected a plant from a list of plants at the greenhouse that needed a curative spray of some sort. The unfortunate winner of this lottery was a dahlia with powdery mildew.

I then sprayed the plant with Lysol to drip. That means I applied Lysol just until the spray began to bead on the leaf and started to drip off in order to ensure complete leaf coverage. This is a common method for applying fungicides that would normally take care of powdery Mildew. 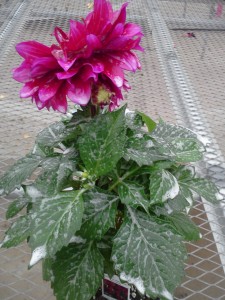 I waited for a bit and this is what I saw: 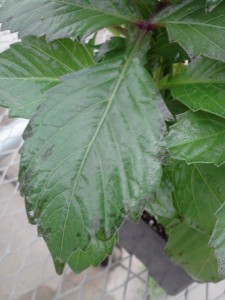 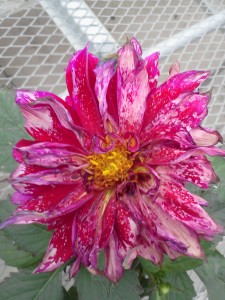 It was even within the first hour that it showed signs of tissue damage around the outsides of the leaves and the once beautiful blossom started to wilt and showing some very noticeable spotting. I knew this wasn’t going to be good.

Here is a picture of the Dahlia after a week: 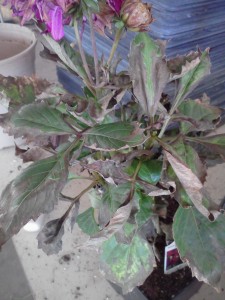 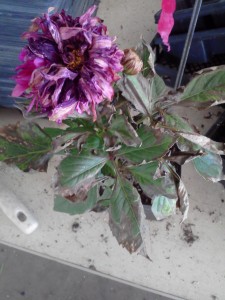 By then most of the plant was crisp and anything living was looking rather weak. I was right – Not good. On the bright side, I’m sure the powdery mildew didn’t make it through this either.

Even the non-aerosol version of Lysol will probably do horrible damage to your plants. Technically the spray didn’t kill the dahlia but it had no realistic chance of being revived to a healthful vigor by the end of the growing season so I had to put it out of its misery.

This still leaves a few questions because dahlias might be particularly sensitive to the ingredients but considering the speed at which the negative effects of the spray set in and the severity of the damage I’m erring on the side of most plants being susceptible of burns. For now I’m going to recommend staying away from using Lysol on plants.